Sir Thomas Playford, the 33rd Premier of South Australia, grew up at Norton Summit in the Adelaide Hills. He was premier from 1938 to 1965, the longest serving premier in any of the Australian states. Playford’s policies promoted cheap electricity, minimal taxes and social investment including the Housing Trust to make South Australia attractive to industrial investment. He attracted migrant workers and tripled South Australia’s population in thirty years. His premiership left the state prosperous and industrialised, but socially conservative. His gravestone reads: ‘A man who did good things’.

‘Years ago, a South Australian Premier, Sir Thomas Playford, told me : 'You never get into trouble for what you don't say.'' 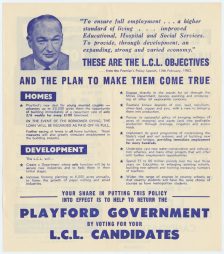 This how to vote card is from the 1962 state election and depicts Playford as leader of the Liberal Party. State Library of South Australia ELECT S 1962

This caricature depicts Playford in 1951. Kerwin Maegraith, courtesy of State Library of South Australia, B 21774 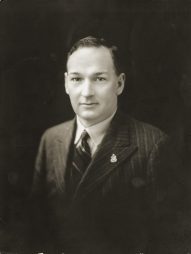